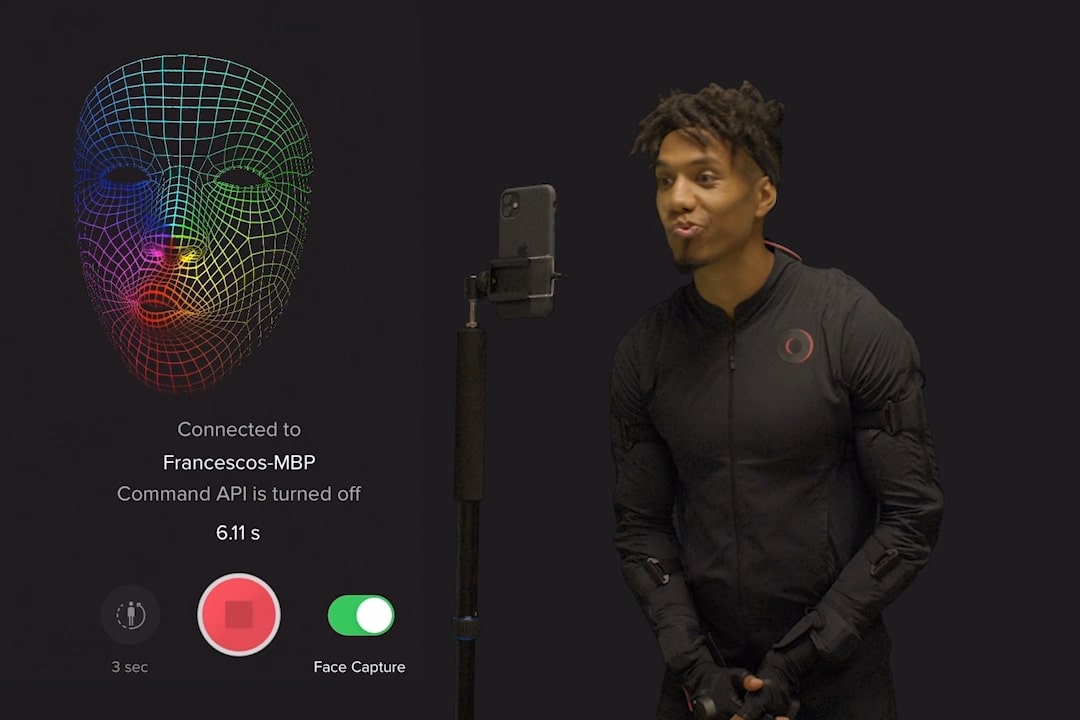 Facerig became internet-famous when it brought facial mocap to the masses. It gave everyone with a webcam the ability to stream their reactions as a 3D avatar. It’s a cutting-edge technology that rocket launched VTubing into the spotlight!

If you don’t know, VTubing refers to creating your own avatar in 3D or 2D and using motion capture to record your character for youtube videos, video chat, or online streaming.

A few more great Facerig alternatives have joined the market in the last 2 years, so if Facerig didn’t quite have the visual effects or the facial motion capture you wanted, there are plenty of affordable animation tools that can get the job done.

The top facial mocap systems combine mobile apps and desktop software. This combo is due solely to the power of Apple’s latest facial recognition technology. Phones with  A12 chip, ARKit, and TrueDepth processor are capable of significantly higher mocap quality. Every app that uses Apple’s ARKit will require your target 3D model to have a standard 52 blendshapes.

This list contains user-facing options that anyone can use as well as professional mocap apps for serious virtual content creators.  Let's dive in!

Rokoko Face Capture app is a professional-grade face capture app available on the iPhone store (An Android version is on the way). It uses your iPhone’s camera and processor to interpret your facial expressions into quality animation data. This data can be retargeted to any of your personal 3D avatars within Rokoko Studio (a free version of the software is available). You can also install one of Rokoko’s free plugins to stream the animation data, in real time, to your character in Maya, Unity, or similar software.

Unlike most alternatives, Rokoko Remote is a reliable, closed-loop system — it includes native integrations for recording, animation, and retargeting. These advanced features, in combination with real-time streaming to any platform, make it a fantastic tool for virtual productions and VTubing.

Unlike Facerig, you will need to have your own 3D assets and character models to start with Rokoko Remote. If you’re not familiar with 3D animation at all, Rokoko’s tools might feel a bit advanced and we recommend starting with a free alternative or enlisting the help of a professional.

You can also do full-body mocap using affordable hardware like Rokoko Smartsuit Pro and Smartgloves. It’s an easy way to free your avatar from the chair (and stand out from other creators).

Check out this VTubing tutorial for Rokoko Face Capture App (the app changed, the process remains the same)

Verdict: Rokoko Remote is a powerful all-in-one system for facial motion capture. While it’s not a beginner solution like Facerig, it is ultra customizable and reliable — a helpful feature when doing live performances. Download Rokoko Studio and try Face Capture for free.

Animaze by Facerig (on Steam)

Facerig has been replaced by Animaze and is free to download from Steam. It’s basically the same thing: a way for you to record your facial movements on a webcam and live stream them onto awesome characters in 3D. Many users love the easy interface, varied style of different characters and pre-made background sets. Animaze is particularly popular for streaming your reactions while playing video games.

Looking past all the hype, it’s a pretty cool plug-and-play tool for live streaming if you’re not too stressed about quality. Default avatars have plenty of customization presets and you can change lighting, textures or even build unique avatars from basic options. Plus, anything you record will include an audio file. You can also buy the paid version of Animaze to get your hands on some premium avatars. It’s possible to add shortcuts that activate additional motion graphics such as emojis or 2D special effects that you often see in cartoons.

Animaze’s facial tracking software struggled in some of our quick tests because it uses the webcam by default, not a high-quality phone camera. You can always improve the tracking by linking up your phone.

Finally, Animaze’s webcam tracker only tracks your face, not your shoulders or upper body movements — so keep that in mind when filming.

Verdict: Don’t expect any incredible lip syncing animation to come out of Animaze. But, if you want to find a quick avatar and hit the stream, Animaze will do the job! There’s no free trial version to worry about— it’s free to use.

VUP is designed by Japanese creators and is used for VTubing and anime music videos. You can download it for free on Steam and use it to stream on Twitch and other networks. It’s a direct competitor to Animaze, but the UI feels like a Japanese game (with Animaze unmistakably more western).

VUP initially worked with 3D models only, but recently it has expanded to allow a new character in 2D. It only includes anime-style characters, and you can also upload custom models and avatars as fbx files (3D) or as model3.json files (2D). Custom background scenes are also supported, either as 3D or 2D files.

VUP can feel a little unfamiliar and challenging to set up for beginners, but you can get going with a good tutorial. You can also connect your phone instead of your webcam to capture better mocap data. VUP avatars come with extra animation and pose controls that you can use to animate characters while streaming. For example, you can create a custom slider setup for your avatar to show the peace sign and then activate that during your stream. This auto-pose is a great alternative to full-body motion tracking. And, while it’s not as easy or as customizable as a mocap suit, it's still pretty effective.

In some quick tests, we found that VUP’s default avatars had good facial tracking and lip sync.

Verdict: VUP is an excellent option if you are working on a project with anime characters and want to take this animated character style for a spin. While the UI is a little complex, it’s still suitable for beginners, and the facial motion capture is pretty accurate.

Mocap X is a facial motion capture app with a pretty standard feature set compared to the best Facerig alternatives. Note that it ONLY sends animation data to Autodesk Maya. While Maya is a popular 3D software for motion capture, it limits you from using C4D or free software like Blender.

Mocap X can record and stream animation data to Maya from up to two phones so you can capture the performance of two characters at the same time. Why would you want this complex set up? It’s designed for live streamers or VTubers who run a show together and are recording data from the same location. The use case for dual character recording is pretty rare, but it could be handy for simple virtual event productions.

There are three different features this app offers:

Verdict: Mocap X is a solid option for animators working specifically in Maya. Its offline recording capability could be helpful if you’re often on the go and don’t want to set up a full live connection.

‍iFacialMocap is another Japanese-made app that works with iPhone’s true-depth camera. It’s pretty barebones and can be used with professional software like Unity, Lightwave 3D, and Blender. You can either live stream animation to your desktop or record animation data within the app and email it to yourself as a .fbx file.

In some cases, the community reports excellent facial reading. But more than a few users have complained of reliability issues (lagging) and a lack of documentation or quality support. This app is supported on iPhone 11 (all versions), XS, XR, X, and up. It also works with iPads.

Verdict: iFacialMocap is a really basic app that’s unfortunately not easy to use. Unless you have a specific reason, we recommend sticking to a different free Facerig alternative.

Unity released a simple facial mocap app in late 2021 to help creators speed up live 3D film and television productions. The Unity Face Capture app is free to download and use for Unity creators. It comes with a few more live 3D production tools such as a virtual camera app, sequences, and recorder.

Verdict: Naturally, Unity’s face capture app is a great option if you’re producing within Unity. If you don’t currently work in Unity or want a flexible animation pipeline, this app won’t work for you. All in all, it’s a bit of a dark horse as the community hasn’t sufficiently tested it yet.

Your path to VTubing stardom

A couple of years ago, live streaming yourself as a 3D avatar was fringe technology. Today the VTubing community is rapidly growing on YouTube, Twitch, Discord, Facebook Gaming, and other social media. Whether you want to join Web 3.0, protect your anonymity, or just have some fun, there’s an audience for you.

Get started with this free full-body VTubing course.