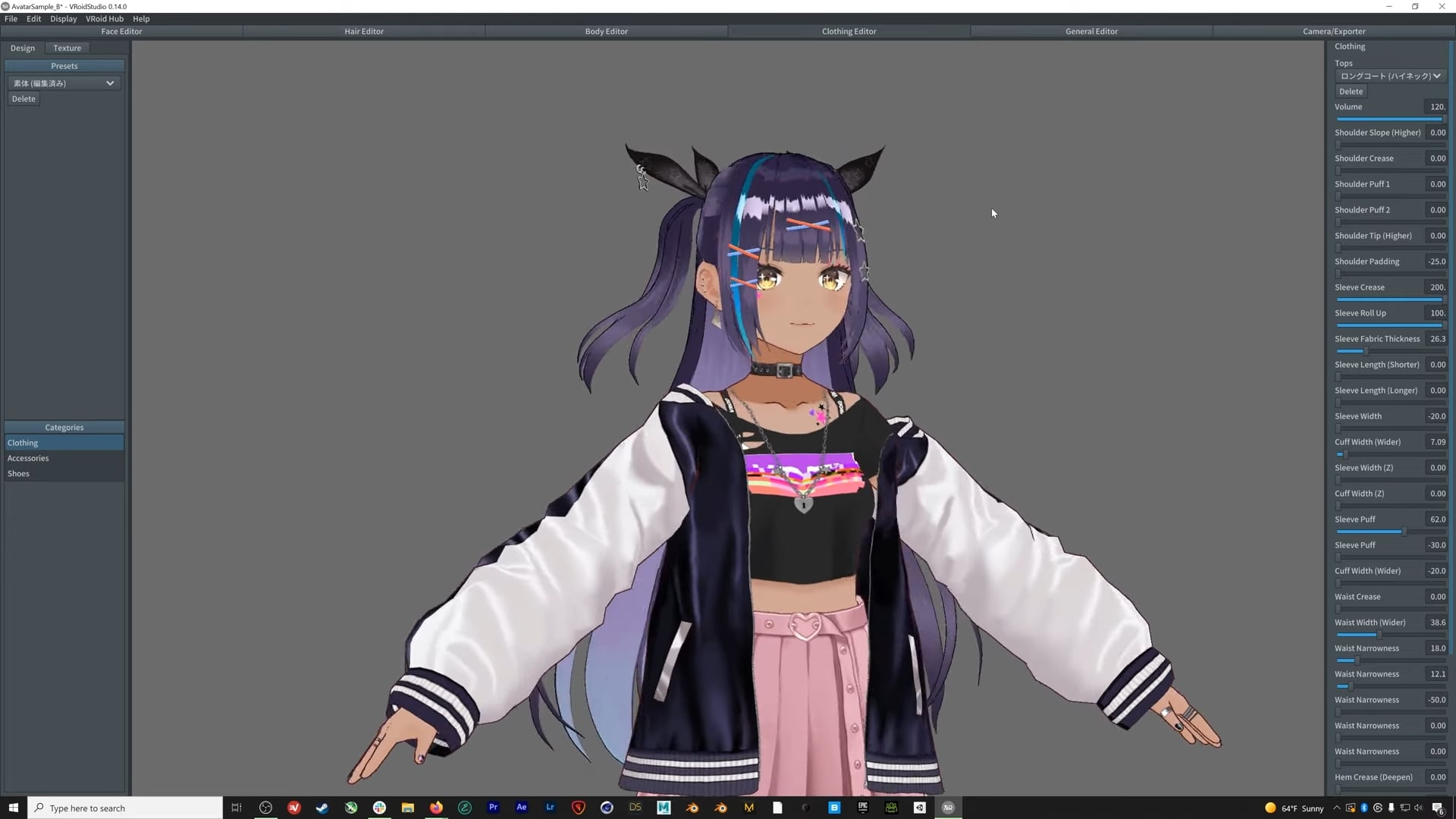 Getting yourself a custom VTuber model can be easier than you think. Whether you’re looking for your very first model, or want to upgrade to a more sophisticated system, this article’s got you covered.

While choosing the right options might feel a little overwhelming, a new avatar can be simple to build yourself or fairly cheap to commission.

After reading this guide you should have a fairly good idea of what software you want to use, whether you want to buy or DIY build a VTuber model, and how much it's all going to cost you. We’ve broken that down into four easy to understand difficulty levels.

But first, let’s cover some vital background knowledge you need.

What is a VTuber model, and how are they made?

A VTuber model is made using 2D or 3D software and is powered through motion capture tracking. These models can be very basic and simple, or highly complex depending on the creator’s preference, knowledge, and VTuber setup. Many VTuber characters are modeled, in style, after anime or video game characters.

You can use your VTuber avatar to live stream playing video games, talking to your fans, interviewing others, and most normal content creation activities. For some, it’s a way to create content on the internet without showing their face. Others just enjoy the novelty of becoming a virtual Youtuber. Some VTubers even have voice changers so that their voice does not sound like their own.

How to choose between 2D vs 3D custom VTuber models

A 2D model is usually made using a combination of Photoshop (or similar art programs) and live2D, a free rigging and animation tool for flat art. 2D VTubers use software like VUP and VTube Studio to live broadcast. On the other hand, 3D VTuber models are far more complex to make and are created on software like VUP, Daz3D, Blender, and Vroid Studio. They can be rendered in real-time using Unreal Engine, 3D software for games.

While most associate anime characters with 2D animation, the well-known anime VTubers (such as Kizuna Ai) are all 3D models with 2D shaders applied. This means they can move in a way that mimics the typical animation style of anime.

Both 2D and 3D VTubing ranges hugely in sophistication and difficulty. It’s possible to download some free software and get started with your webcam. It’s also possible to spend hundreds of hours creating a sophisticated model with an interactive environment. The approach you choose depends on the type of VTuber you want to be and the budget available to you.

The most well-known VTubing software is available for free from the Steam Marketplace. It uses your webcam and is free with a few optional upgrades.

This type of software combines the modeling and broadcasting aspects of VTubing into one, easy-to-use solution. You can, however, import custom models in file formats specific to each software.

You have the following options:

VUP Studio is free to use and is the best place to go if you want an anime-style virtual avatar. Like the other software in this list, you can port in extra mocap hardware, set up coded action shortcuts, and use pre-built backgrounds.

Your avatar can be in 2D or 3D depending on your personal preference. You’ve got a few basic avatars to choose from and some simple customization sliders.

Animaze (previously FaceRig) is more suited if you’re going for a non-anime 3D character. Animaze has characters from popular games, as well as a few originals. They also have a basic avatar base that you can customize (but it looks quite similar to other Animaze avatars).

There are a few premium avatars that you can buy within Animaze, but there’s no guarantee no one else will be using them.

VTube Studio only supports characters in the live2D format. The designs are similar to VUP Studio and follow a classic anime style. It’s also free to use, and a lot of people who like the 2D aesthetic choose VTube Studio for its easy interface.

Difficulty level 1: How to Commission a good VTuber model from creators

Just like with other digital art, you can commission models from popular marketplaces, places like Fiverr, or solo artists that you find on search engines or social media.

Here are the questions you should ask yourself and potential artists when commissioning a model:

This depends on how you want your character to look. If 2D is your preference, then it’s pretty clear-cut. If you’re thinking about 3D, then there are a few more considerations:

What software will your model be built for?

What props (if any) will your character need?

Props like cat ears, a wand, hand-held objects, a cloak, etc. can be expensive because they need extra rigging and modeling. In 2D, this isn’t much work, but in 3D, your artist will need to custom build the props in tools like Blender.

What facial expressions do you need?

Simple 2D VTuber models will have the basics of facial expressions; eye movement, mouth movement, eyebrow movement, and even head tilt. But you won’t be able to make those typical anime facial expressions (pictured below) without them being drawn and coded into your model.

What rig will your character have?

Rigging is one of the most important aspects of a good VTuber model. Without rigging, your character cannot move. A ‘rig’ is basically the skeleton of your model. This skeleton’s bones are linked up with other bones so that your model can move according to the motion capture data you input.

2D artists tend to NOT offer rigging and you will need to find another person to do the rigging for you. On the plus side, rigging live2d models is pretty simple if you use a good tutorial.

3D artists will almost always include some kind of rigging for your model. Some artists will offer complex rigging like spring bones for hair animations (which are highly recommended if you want natural movement). Depending on the software used, rigging can be pretty tricky, so unless you have some skill in 3D, it’s wiser to leave it to the experts.

How much of your character’s body will be built?

If your VTuber model will never stand up out of their virtual chair, there’s no need to create the bottom half of the torso or full body artwork. Keep in mind that it’s always worth getting the arms and hands modeled, as you can create shortcut animations for these regardless of motion tracking.

Difficulty level 2: Creating your own character with an avatar builder

There’s no reason to start from scratch if you want to build your own VTuber model. And often, you don’t even have to pay for expensive software if you’re willing to put in a little extra effort.

An avatar builder is 3D software that provides you with varying base avatars, and easy-to-use customization options. They can be limited in certain aspects, but all-in-all offer an excellent middle ground if you’re into DIY.

We’ve listed the top avatar builders below and paired them with a corresponding video tutorial on how to create your avatar.

VRoid Studio is excellent for anime character models. They also have a secondary marketplace where independent creators make assets that you can buy.

Daz3D is a fan favorite among all animators who want to make unique 3d models fast.

MetaHuman Creator is a great way to create a digital double for yourself or to develop a photorealistic character that doesn’t yet exist.

Character Creator 3 is similar to MetaHuman Creator but has more options and features. It’s the only software on this list that costs a bit to use.

Once your VTuber model is finished and exported, you will need to import it into Unreal Engine —  a popular game engine that is capable of rending 3D animations in real-time. You’ll also have to upgrade from the webcam recording and use a more sophisticated motion capture option. Learn more about VTuber setups here.

Difficulty level 3: Creating your own character in Maya/Blender

While it’s possible to create your character using a standard animation modeling pipeline, we don’t think it’s the most time-efficient way to go about it. If you really really, really want to, here are a few pointers to keep in mind:

Last considerations for your VTuber model

Now that we’ve got the technical aspects of your VTuber model, it’s time to think about how you can take it up a notch.

A VTuber, like other streamers, is an entertainer. So how will you entertain?

For example, VTuber Code Miko uses custom code to let watchers write on her shirt or walk around as labeled minions in her background. She grew her Twitch channel faster than many could believe thanks to how she gamified the entire VTubing experience for her fans.

To go beyond building a model and learn how top VTuber creators use motion tracking to create immersive environments, check out this VTuber tutorial series. It will guide you through importing mocap data from your body, hands, and face into Unreal Engine, and how to broadcast to Twitch or YouTube.